I came across this video this morning. I had thought of making a how to video for the C47, but never did. Well now I there is this, though we could have used a demonstration too.

What is a C47 & what’s it for? Filmmaking Tutorial from Darren Levine on Vimeo.

It is not often you get to chat about Cinematography with other Cinematographers in a public forum. Today I had the opportunity to discuss with my fellow Cinematographers the state of things in the MSPIFF forum. There was a packed tent with folks that were industry veterans and film students. We talked about the number of options today with electronic motion picture cameras. Too many? We talked about tools of the trade and 3 out of the 4 really missed pulling out the meter and really only Greg Winter said he still does use a meter regularly.

We talked some about lens quality and the overall shortage of quality lenses acknowledging that more lenses are being produced than ever before. Of course the discussion led to presentation and all of us agreed that digital projection is not there. Inconsistent, inaccurate, poor quality. All were hopeful that the quality would improve, perhaps. There was some discussion about the effect of not having a shutter on the electronic projection as a possible change to how we view films subconsciously.

Along with tools, we talked about how some of the lighting tools have changed, but others have not been replaced (18K).

We also had some discussion about other formats like 3D and interactive. Across the board 3D was viewed as a gimmick but Bo Hakala and Greg Winter had some interesting ideas on pushing the interactive nature of storytelling.

One question from the audience was on practical vs digital effects. Kevin Horn and I said we would prefer to film practical effects in camera and Greg and Bo brought up the idea of shooting digital effects with enhancement from the practical. Really blending the two.

Two hours went by really fast and I’m sure we could have kept chatting for at least another two.

2014 is here. What does that mean? Flying cars? no. Teleportation? no. Replicator? no, maybe 2014 is not the Star Trek future I had wished for, but there are some things to look forward to.

Cameras – The last few years has seen new cameras coming to market faster than ever. 2014 will be no different, or maybe it will be better. Arriflex or ARRI has the documentary bred Amira coming out some time after NAB. I haven’t been this excited about a camera since the SR3 came out when I was in college. The Alexa has proven that there is more to a camera than the size of the sensor.

Speaking of sensor size, the RED Dragon sensor will be exciting when it arrives in all of our cameras.

The Digital Bolex promises to be an indy darling for sure. Looking forward to getting my hands on one.

Black Magic Design has shaken up NAB the last two years, but have yet to deliver the 4K camera they promised. It is sure to attract the student, independents and some other productions, but if it is anything like the BMCC it still has to fight the ergonomics and other limitations.

What else is out there? Open source sensor and software developers. smartphones. action cameras. wearable cameras from Google and other wired sources.

Lighting – Who needs lighting when you have a RED Dragon sensor? LED lighting has begun to explode with many manufacturers entering the scene. We have adopted the AAdyntech lights this last year. Mole Richardson also brought updates to the classic Baby, Tweenie and Junior line with High CRI led instruments. This year there will be more compact sources packing high output and better CRI readings.

Monitors – How we watch the films we make pales in comparison to the resolution of these cameras. On set the monitor may be HD or near HD in pixel count, but the display of color and gamma needs varies widely. In the edit room these monitors get better but the calibration of the monitor is still something of a sorcerers conjuring leading to graded images the vary from venue to venue. Then of course is the monitor in your living room. Mine is still a Plasma 720. At least we stopped talking about 3D.

Here’s hoping the 2014 is an exciting year filled with cool new gear and lots of opportunities to use the gear we have.

Here’s a great article on why you should use a lightmeter. 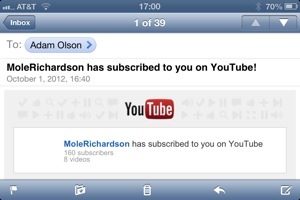