Here is a great little video about the Sony XAVC codec.
Always learning.

So I finally embrace the LUT and want to try the cool LUT I just found here but the Speedgrade manual and Adobe help aren’t exactly helpful. What is a LUT? This Wiki will explain it.

After playing around in various forms, a restart and lots of worthless Google searches I stumbled on the solution by accident. In the lower left corner, click on the + icon to open a menu and select FILM and choose LUT. 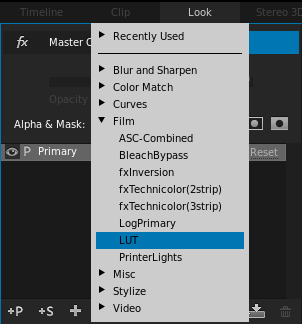 This will allow you to select the LUT you have downloaded, is available as a default or something you have created in another application.

If you are looking to try out a LUT without paying, try out the Instagram looks I found here.

It is only a couple of weeks until classes begin. I was thinking about how I teach the basics of filmmaking and how it would be really useful to have some visuals besides films to talk about composition. And then I come across this video which is sort of quirky but it works.

So if you are taking a class with me in the future maybe I’ll show this video.

Once upon a time you could shoot 60FPS material on a video camera and use Cinema Tools to conform or alter the properties of the clip to 23.98 (or 30 if you were so inclined). With more folks using Premiere to edit I couldn’t find the solution to do the same until I stumbled upon another blog post. Within the project folder right-click on the clip that was recorded at 60FPS and choose Modify>Interpret Footage. 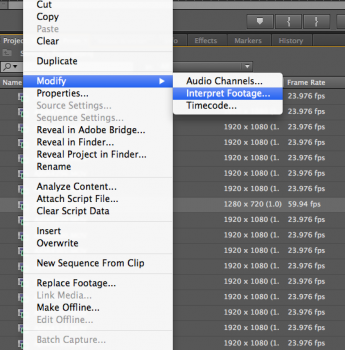 In the dialogue change the Assume Frame rate box to the appropriate time base for your project.

Done.
Now this does not change the size of your clip so if you recorded slow motion clips at 720 and the rest of your project at 1080 you will have to scale up the slow-motion clips or scale down your 1080 footage.

This week I have been thinking a lot about color correction and color grading. Probably because I had a lecture on it in two classes and I’m finishing up post on two projects. I’ve always enjoyed color grading and what you can do with the final image. My first visit to the color suite was in 1995 in film school. We shot color neg and took it in to get transferred and they used a telecine with a Davinci color corrector. It was amazing. And expensive. Fast forward 20 years and we have so many options for color correction that it is dizzying. Davinci, as Resolve, is still in the picture. The color correctors in the NLE programs are very powerful. What is the point of this post?

I thought I had a point when I was thinking about writing this post, but mostly it was random thoughts on color correction. We are in a period where the look of the film belongs to the colorist. As a DP this is very scary, but also freeing in that everything I do on set is not the final look. Small HD has released a monitor that allows you to load a custom LUT so you can view your RAW/Log files with a defined look. That is really cool. The cameras that have that ability are available at prices that would cost less than my telecine session in 1995 without inflation adjustment! There has never been a better time to be a filmmaker. And there has never been a worse time.

Here’s the link I sent my students to for a primer on color correction.

(or how I finally gave up and began to accept Premiere)

It has been more than 2 years since Apple announce FCPX. Many of us looked at it and decided to hold on to FCP 7 a little tighter. A bit of history (for me) about Premiere. Back in the mid to late 90s digital non-linear editing was just getting off the ground for those not able to afford the AVID. At school we had some crazy system with outboard capture cards and rendering and monitoring. At the heart of it was this program from a company that made Photoshop. Adobe Premiere. I don’t remember all the 3rd party stuff, I just remember the status bar saying “about a day” to render a 30 second clip. This is before mini-DV, but still very much Standard Definition. This had me running back to the film editing room where the Moviola hummed my name.

Shortly after that AVID became less expensive so I got some experience on that and it was great, but still a very specialized system. Then about 2 years later, Apple introduced Final Cut Pro. We had DV cameras, Firewire and an editing program that was cheap and worked. For about 10 years that was the case. And for many of us it has been 5 years since we’ve seen an update, but that’s ok, we’re still making it work.

After getting a new machine and a new operating system things have come to an end. It wasn’t like a light switch turning off the program like an update of iTunes. (that is another horror story) Working on a project transcoding DSLR footage into FCP I thought it was strange that a couple of clips were very short. I hadn’t remembered turning off the camera like that. I quick check of the files and sure enough they were not transcoded correctly. Ok, new project, lets try again. Same result. We shot with 2 cameras, maybe just an issue there. Sure enough I found a couple files that weren’t right. That’s when it happened. Launch Adobe Premiere and import files. Set-up project and begin.

For all these years Premiere has gone through many changes and was thought of as second rate, not quite right, quirky. Well maybe it is, but for right now it works and is (so far) just as comfortable as FCP7.

This was really helpful last week while trying to finish up a short commercial project. It was generated in Final Cut Pro 7, yes I’m still using Final Cut Pro 7 in 2013. It is familiar, easy, and usually just works. This is how many people describe their car. I am certified to teach AVID and have used Premiere. I played around with Final Cut Pro X and then put that away. So what is the point of this post? Nothing really, it is a simmered rant on the state of things. Final Cut 7 and Mac OS in general continue to disappoint. What causes a General Error? It could be this or it could be that. After trying many things and painful restarts and using other systems I finally found the culprit. A sound file that was “corrupt”. I returned to the source disc image and replaced the media, opened the project and everything worked. How did this sound file become corrupt? We’ll never know. Could it have happened with another NLE? who knows. Always make a disc image / back-up of your files and hope you never see a General Error.

check out this summary of comments murch made at a conference recently.