I was thinking earlier today about what is going to drop at NAB in April. With a new camera every year from BlackMagic I feel this year will be no different. Now that they have their sensor sourcing figured out and in camera card formatting and firmware updated the next camera will be more refined building on what they have learned. I believe they will release a super 35 sensor 3.2K “pocket” camera. Maybe the form factor will be slightly chunkier depending on the card the decide on. They like off the shelf SD, SSD, etc, but maybe the will take the leap to CFast as ARRI has. Either way it will give the GH4 a run for the money and perhaps not be as awkward as their other offerings.

The Canon c300 mk2 is obvious, but what it will hold is up in the air. 4K? price? slow motion? I think the other rumor floating around about Canon dropping something below the c100 to give the GH4 some competition is interesting. 4K with dual pixel for under $1500? SOLD! fixed lens? maybe not.

RED will have the circus around their update. Do you really need it?

Stabilizers. I hope to see some more innovation rather than just copies of the MOVI and RONIN. I do think with the recent price drop of the Ronin that DJI is clearing inventory for another version of the Ronin. Lighter? yes please, this guy is a beast even with a 5D on it. A smaller version to hold A7s, GH4 and other smaller cameras? Could be.
I am still very interested in the HELIX from Letus but at the price point it is still too far out of reach.

2014 is here. What does that mean? Flying cars? no. Teleportation? no. Replicator? no, maybe 2014 is not the Star Trek future I had wished for, but there are some things to look forward to.

Cameras – The last few years has seen new cameras coming to market faster than ever. 2014 will be no different, or maybe it will be better. Arriflex or ARRI has the documentary bred Amira coming out some time after NAB. I haven’t been this excited about a camera since the SR3 came out when I was in college. The Alexa has proven that there is more to a camera than the size of the sensor.

Speaking of sensor size, the RED Dragon sensor will be exciting when it arrives in all of our cameras.

The Digital Bolex promises to be an indy darling for sure. Looking forward to getting my hands on one.

Black Magic Design has shaken up NAB the last two years, but have yet to deliver the 4K camera they promised. It is sure to attract the student, independents and some other productions, but if it is anything like the BMCC it still has to fight the ergonomics and other limitations.

What else is out there? Open source sensor and software developers. smartphones. action cameras. wearable cameras from Google and other wired sources.

Lighting – Who needs lighting when you have a RED Dragon sensor? LED lighting has begun to explode with many manufacturers entering the scene. We have adopted the AAdyntech lights this last year. Mole Richardson also brought updates to the classic Baby, Tweenie and Junior line with High CRI led instruments. This year there will be more compact sources packing high output and better CRI readings.

Monitors – How we watch the films we make pales in comparison to the resolution of these cameras. On set the monitor may be HD or near HD in pixel count, but the display of color and gamma needs varies widely. In the edit room these monitors get better but the calibration of the monitor is still something of a sorcerers conjuring leading to graded images the vary from venue to venue. Then of course is the monitor in your living room. Mine is still a Plasma 720. At least we stopped talking about 3D.

Here’s hoping the 2014 is an exciting year filled with cool new gear and lots of opportunities to use the gear we have.

So the camera has been out for a year, but this was our first outing with the small box with a lens mount.

I can say that I was more impressed with the camera than I thought I would be. Why is that? As many have noted the camera has many shortcomings but comes in at a price tag that may have you overlooking them. The recording and file types of the camera are amazing at any price. Recording straight to ProRes will cost you at least another grand coming off your Sony/Canon/Nikon and you have to attach that gizmo to your rig. The BMCC does it in camera. If you want raw, you can record to Cinema DNG files. Be prepared to spend some time with Resolve or some other workflow to get your RAW footage into your NLE.

It was really easy to use and intuitive. An inexpensive camera should not be complicated. Some of the features like focus assist were very useful. We used the Canon EF model with a variety of lenses. The Tokina 11-16 worked great as did the Rokinon Cine primes. One of the Canon EF lens had trouble with the iris control. It worked fine on a DSLR, just couldn’t communicate with the BMCC.

The shortcomings have been well documented and some are just compromises of an inexpensive motion picture camera. Not every camera can or should do everything. If it does it should cost more than $2K. The first thing my students asked was how fast does it shoot? 60 fps? nope. You got 24 or 30. Okay, I can still make a movie with that. Card format and clip editing in camera. nope. You have to connect your SSD card to a computer to format it and manage any clips. The battery is internal. What? By the time we had the shot set up and dolly shot rehearsed the battery was flashing 25%. More cable wrangling or a third party solution to power. Can I plug a mic in? Sure with an adaptor to 1/4″ plugs. But I don’t hear any sound. That’s because there is no Phantom power and we have a 416 p48 plugged in. I’m sure there were other minor issues but none that stand out.

If you are aware of the compromises you can use this camera to make some great images. If you were expecting a RED EPIC for $2K you will be disappointed. 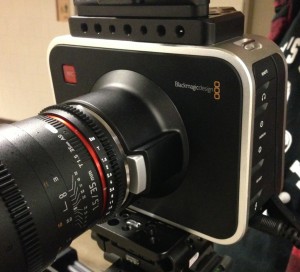 Alright, I’m the film guy. I just had a thought about how new film stocks would come out every couple of years. The manufacturer would tout how amazing and improved the stock is and how it was simply better in every way than the previous 200T or whatever. Then every article in American Cinematographer would talk about shooting the older stock, because the cinematographer knew how it would look through post, because they need time to acquaint themselves with the new stock. Even years after a stock had been discontinued you might hear someone say, wow I really miss ’93, the color palette was amazing. So my point in this post is that digital cameras are flying at us with unprecedented speed and we see even more tests on vimeo or forums but I don’t see that we are comfortable with what is right now like we were with film. This post will be out of date in a month. Whatever camera I mention will have a new update, new model or be completely antiquated in a month.

Right now I’m using a Canon 5DmkIII. I also use a RED ONE MX and RED Scarlet from school. And I have a Panasonic HVX in the closet that comes out to play on long format productions. These are good for now, but there is something better. Dragon, Alexa, Black Magic, Sony. They all have cameras that are better, smaller, faster out right now. The point I’m trying to make is will my 5D or Scarlet be the films stock that is no longer manufactured? Or is the new Dragon sensor really a better film stock than that old 93 ever was and I just need to move on? Will it be good enough to not compare to film at all?