Who buys a two year old camera? (18 months technically) I guess I do.

You see these days there are two types of digital cinema (video) cameras. There is the compact, affordable, feature changing type like the Sony A7 line, or the slow to deliver Canon 5D line. And there is the high end stuff. Arri Alexa has a 8 year old sensor. Still working very hard. The MX sensor in the RED one is still amazing. ( the 2 minute boot time is not )

So why is it these high-end cameras have stabilized? Firmware. Recently the school I teach at just got a Sony F55. With new firmware the camera can record at higher bit rates, unlock high speed settings that weren’t available when the camera was released. Now the Fs7 I bought is not an F55, but as Alister Chapman has pointed out the Fs7 does 95% of of what the F5/F55 does. For me that is pretty awesome.

I didn’t expect Arriflex to jump on the square-box-camera wagon after the Amira. But today’s announcement of the Alexa “mini” is just that. All that you would expect from Arri in a refined little package for less money.

It really is curious what RED has hinted at with the peak at their new “Weapon“. Perhaps it is the dragon sensor in a more refined body than the EPIC. Maybe RED truly is the innovator they claim to be with ARRI making the Alexa fit into the EPIC mold (body style at least).

Also the C300 mk2 has the internet a buzz as well. Will Canon bring a competitor to the Sony Fs7 or just more of the same and tell the customers it is better? We will see if they can keep it under wraps until NAB or just start announcing early. 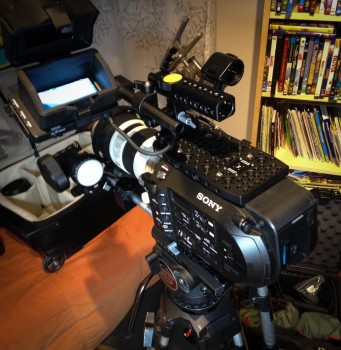 Every once in a while you see a film and it strikes you as being something exceptional. Maybe the story, the cast, etc. Recently I viewed “Ida” on Netflix having read about it in American Cinematographer some time ago and obviously didn’t see it in the cinema. What I really responded to in the film was the pure visual storytelling. The Cinematography is excellent. They came up with a way of composing many of the frames with extra room above the characters which is a bold move. They framed the movie in 1.33:1 which gives it a classic pre-50s feel along with being in black + white. Overall I think it is the simplicity of the film that was interesting to me. See the film and check out the details and analysis of the cinematography on the ASC website.

What a cool format that was gone before it had a chance to really be fully embraced. Just today ARRI announced a digital Alexa 65 with a huge sensor requiring lenses with a large image circle. Borrowing from still photography they’re calling it medium format. Rental only at a substantial rate I imagine. It’s just cool to know that that camera exists. Fascinating article published in Film & Digital Times.

So I had a chance to spend the weekend with a set of vintage Hawk anamorphic lenses. I was focus puller on a short project so I didn’t have a lot of time to try out the abilities of the lenses but did see some interesting things the D.P. pulled off. They were paired with the Alexa Plus 4:3. First of all they are beasts, like any large format cinema lens the glass is heavy but these were all in the front element. Given that these were vintage and from what I could tell not overhauled they had peculiarities. The 35mm was very wide, but only the center of the frame was truly sharp. The other lenses in the set were a 50, 75, and 100. A PL 2X was used to add a little more focal length to the set. The 100 looked fantastic as almost a long normal lens. The second thing about these lenses was the witness marks were all over the place. At each lens change I had to set up marks through the eyepiece using the zoom function on the camera. This is not out of the ordinary on a large shoot, but it would be nice if you could make adjustments to the focus using the marks on the lens. Finally, the stiffness of the focus ring made focus changes tough. It even caused the old Arri FF 2 to squeak. Thankfully we were not filming on a quiet set. Without seeing the final image taken through post I couldn’t say decisively how well these old lenses performed and whether or not it was worth the trouble. I look forward to working with anamorphic lenses again. 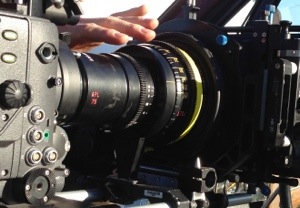 Another article posted today about 4K and the arguments for and against, or rather digging into the hype. It is from the perspective of the team working on the Digital Bolex project. Joe makes some really good points about bit depth and comparing it to audio is a great way to understand it. It also reminded me of the Alexa demonstration where the guys from Arri were explaining why the Alexa’s 3.5K sensor was the right choice for digital cinema. Beyond the numbers and specs they were after a pleasing image which includes sharpness, color, clarity, definition, dynamic range, resolution and any other word one may want to use when trying to achieve an image as good as or better than motion picture film. Give the article a read and dig deeper into any new tool before touting it as the next big thing.

Alright, I’m the film guy. I just had a thought about how new film stocks would come out every couple of years. The manufacturer would tout how amazing and improved the stock is and how it was simply better in every way than the previous 200T or whatever. Then every article in American Cinematographer would talk about shooting the older stock, because the cinematographer knew how it would look through post, because they need time to acquaint themselves with the new stock. Even years after a stock had been discontinued you might hear someone say, wow I really miss ’93, the color palette was amazing. So my point in this post is that digital cameras are flying at us with unprecedented speed and we see even more tests on vimeo or forums but I don’t see that we are comfortable with what is right now like we were with film. This post will be out of date in a month. Whatever camera I mention will have a new update, new model or be completely antiquated in a month.

Right now I’m using a Canon 5DmkIII. I also use a RED ONE MX and RED Scarlet from school. And I have a Panasonic HVX in the closet that comes out to play on long format productions. These are good for now, but there is something better. Dragon, Alexa, Black Magic, Sony. They all have cameras that are better, smaller, faster out right now. The point I’m trying to make is will my 5D or Scarlet be the films stock that is no longer manufactured? Or is the new Dragon sensor really a better film stock than that old 93 ever was and I just need to move on? Will it be good enough to not compare to film at all?

Check out this tool for figuring out what your field of view will be for all the different flavors of cameras.