It has been nearly a year since I’ve written anything here. What’s new? What’s old?

Current rig is the Sony Fs7. The only upgrade this year was a switch to V mount batteries but not the Sony accessory, just a dumb mount from Core. This years goal is to upgrade to better lenses. Perhaps Sigma Zooms and Primes?

Another tool I hope to get this year is an Easyrig®. After operating on a feature (handheld) in June my arm just can’t do it. We’ve seen the Steadicam get budget models over the years but this item is always expensive.

Excited to see what this year may bring.

I got to try out the new stabilizer tonight. Just a first impression but I really liked it. It was much simpler to balance than a steadicam and can be used in really dynamic ways. Here’s a clip of the footage. My children are the subjects.

Here is a shot from @MplsFilms 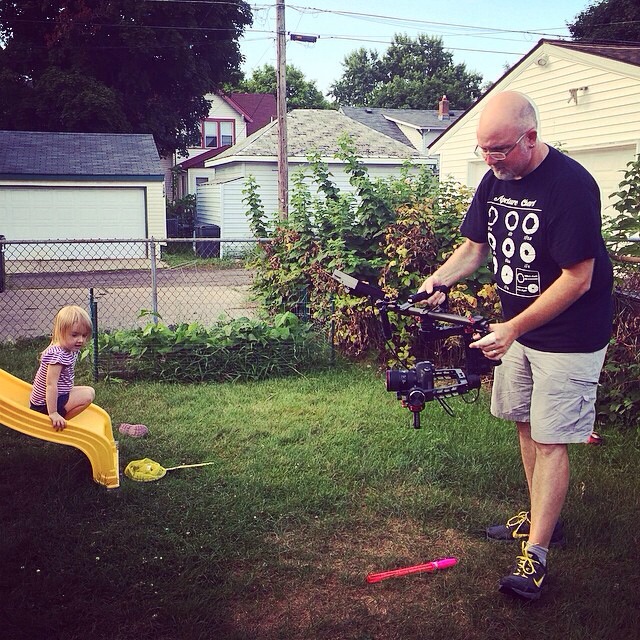 So our latest camera purchase is not a Black Magic pocket or a preorder on a digital Bolex, though that is pretty tempting. I finally caved and joined the ranks of the GoPro legion. I’ve used these a couple of times for point of view camera. Strapped to a bike it gives a cool perspective. Of course extreme sports people are the primary customers. Anyway, the justification was that we could use the camera(s) in places that we can’t get angles with traditional cameras. Little Tree Films does lifestyle work, so weddings and other life events are the projects we work on. With these types of shoots coverage is very important and there are no second takes. What I like about this little camera is that it is so small an unobtrusive that you can put it anywhere. The capability to shoot 1080 at 60 fps or even 120 fps at 720 is appealing too. The ultra wide everything in focus is the downside, but every system has a tradeoff. I’ve seen people come up with adaptors to add c-mount lens to the front of the GoPro to allow focus and aperture control. I really don’t think these people understand the purpose of a GoPro. It reminds me of a time about 8 years ago when P+S Technik and RedRockMicro were adding these crazy adaptors to DV and HD cameras.

In addition to the GoPro and the many different mounting options we also picked up the Steadicam Curve. A small stabilizer designed specifically for the GoPro. It is a new item, so it hasn’t arrived yet, but I’m looking forward to handing it off to Finn to see what he comes up with.